I sat down on the bench of a local park here in Antigua, Guatemala. It was the first week of quarantine. As I enjoyed the silence of this previously crowded space, a little boy came up to me and said in Spanish, “Excuse me sir, do you have some change you can spare?”

I checked my pockets for change. Nothing. Then I checked my wallet while the kid tried to peek inside of it. All I had were bills of 100 Quetzales (equal to $12). “Sorry bud,” I said, “All I have are large bills.” The kid didn’t stop there. He boldly demanded one of the bills. I smiled and barked back, “What? Who are you? Come here you little …” I tried to grab him but he jumped back and giggled. “How about I buy you atole (cornmeal drink) from the lady right there,” I said, pointing to the vendor near us. He nodded.

The boy followed me up to the lady and as I began to make the order, he asked for two more cups: one for his mom and one for his uncle. The lady vendor just shook her head, and when the boy walked away with the cups, she yelled out, “Boy, can you say thank you?” The kid obeyed and said to me, “Gracias!” Then the lady began to explain how she knew the boy: His father was out of the picture and his mom was physically disabled. The boy’s mom sends him out to dig in the trash cans everyday because she can’t work.

My heart was pierced! I thought the kid was just pestering me for money because it was obvious that I was from the U.S., a place of wealth. But no, the kid was in real need and instead of helping him, I chose to go the easy route and buy him a snack. I felt terrible, not only because I was being stingy but also because I contradicted one of my own beliefs, that is, that God often uses our surroundings to pull us into a redemptive story. Unfortunately, I missed the opportunity to be drawn in. The good thing is second opportunities always surround us.

A few weeks ago, I posted a video on Facebook about the Guatemalans who are using white flags to indicate their extreme need for food. These folks either stand on the street corner waving their flag or set it outside of their homes, hoping that someone will respond and bring them some type of sustenance. I found this video inspiring because it demonstrated the power of community: neighbors caring for neighbors during a time when competition seems to characterize most communities around the world. I looked forward to running into a flag waiver, maybe even giving that person money for food. But as far as making it a cause or anything of that nature, no thanks. I didn’t come to Guatemala to get involved in community work. I came to rest and recover from a mental health breakdown that happened about a year ago.

Then I received two text messages.

My friend Chris and my mentor Dina both offered to send me money so I can help a few people. It was like a sack of money fell on my lap, but I wasn’t excited. Nevertheless, as I thought more about the way God often uses our context to draw us in, I began to challenge my excuses. Was I still mentally unstable? No. Was I fully rested? Yes. Then why was I being so hesitant? I don’t know. Only a few weeks ago, I was dreading the possibility of contracting the coronavirus, but somehow I moved beyond that. So then why was I wavering? I was not sure. The only thing I could come up with was that sometimes we become complacent in the space and routine of our daily lives, and anything that would pull us away from that can feel threatening.

It’s always scary to be pulled into the unknown. Organizing and community work for me isn’t unknown, but the fact that I was in a foreign country and in a foreign culture made me feel like I was not suited to serve here. But the next day, after the texts, I walked past a neighbor’s doorway and saw him holding a handful of beans. He was counting them one by one and my heart broke! Then I knew that the remedy to my stressful resistance could only be found in opting into the story that surrounded me. So I matched the amount of money with my own, and I allowed myself to get pulled in.

I started with the fundamental building block of community organizing: Knocking on doors. I looked for those who could help me deliver food, as well as those who were in need of food. I made a list.

My first contact was an elderly Kaqchikel woman named Francisca. I was taking a break from my jog on the first tier of the town’s hill. Francisca walked up the stairs, wearing her traditional dress and carrying a basket of food on her head. When I saw her, I ran up to her and startled her, probably because of my tattoos. In Guatemala, tattoos are usually associated with gangs. So I pulled back a bit and said, “Mam, I just want to know if you need food. I will be delivering food tomorrow and I am looking for people in need.”

“Hallelujah!” She shouted. “I do need food, and so does my friend who I’m visiting.” Amazing, my first connection! I shared with her details about how I would deliver the food the following day and when I finished, she asked me, “Young man, why are you doing this?”

I thought for a second, then I said, “I’m doing this because I care and I need to obey God.”

Francisca took a step toward me and said, “You are an angel,” but I immediately shot back, “No, mam. I’m a gargoyle.” She squinted as she looked at me in the eyes and began to share about God’s unconditional love. Then she put her hands forward and began to pray over me in her native language. When she finished, she gave me her phone number and we parted ways.

I could feel her blessing in my heart. 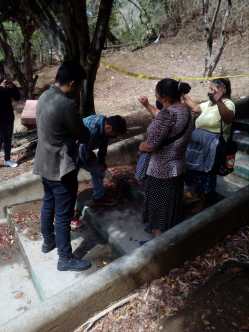 Francisca and her friend blessing us.

On Saturday morning, I assembled my team of neighbors, four total, and we went to the grocery store to purchase the food. We packed 20 bags with about a month’s worth of food for one or two people. Our first stop was Francisca’s friend’s home. She was already waiting for us outside with her friend. When we gave her the food, she gave me a list of scriptures and offered to pray for me. I knelt on one knee and she prayed a blessing over me.

Then we drove to Santa Maria de Jesus, a predominantly Kaqchekel town. This was the tribal community of one of our team members, Brenda. We dropped off several bags of food there, and the people were utterly grateful. My highlight was watching our other team member, Aaron, pray over an elderly man who was sick. We walked into the house and there we saw the man laying on his bed. His wife was so happy. Aaron asked if he could pray for the man, and the man didn’t hesitate to say yes. He sat up and Aaron pulled out of his pocket a vial with oil. He poured it over the man’s head and prayed for healing. The elderly couple then blessed us and we began our way back home.

Something happened to me that day. I’m not sure what it was, but I feel different. I don’t know if it was the displacing effect of being in a foreign country, or the beauty of the indigenous elderly blessing us, or witnessing a new level of poverty I’ve personally never seen before. But it has changed me, and I don’t think I really had a choice.

Our environment will always be more powerful than our individuality. It will always be something that connects us to each other. Our social environment is an intricate compilation of many selves, interacting directly and indirectly, forming what we call “community.” And communities always have a story, stories that often pull us in even though we often resist. I resisted and I became miserable … until I allowed the hands of God to pull me into the arms of my neighbors. Now, I am committed to continue the work of providing the elderly with food until the lockdown is over because in providing, I receive a blessing; and the blessing to me is the confirmation of my small role in God’s story among the people of Antigua.

I took a walk the other day and I saw the little boy again. I walked up to him very excited and I asked him if he remembered me. He said, “No.” Bummer! Nevertheless, I gave him a bill of 100 Quetzales and said to him, “Thank you.” He looked at me confused but I didn’t feel the need to explain. Then I learned the boy had a name: His name was Moises, which in Hebrew ironically means “to draw out,” just like I was drawn out from my complacency and into a new story that has changed me forever.

Video of us in action.