Officers no longer say, “I pulled him/her over simply because he/she was black / Latino.” Beyond political correctness, most people would agree that this kind of statement is inherently racist. No questions asked. In fact, this practice, also known as “racial profiling”, was once common in law enforcement but is now deemed unconstitutional. But what about when officers, patrolling a neighborhood made up mostly of people of color, say, “I pulled him/her over because the neighborhood I encountered him/her in is, statistically speaking, a bad neighborhood”? Would this statement and the kind of profiling this statement justifies be considered racial, or racist, in nature? 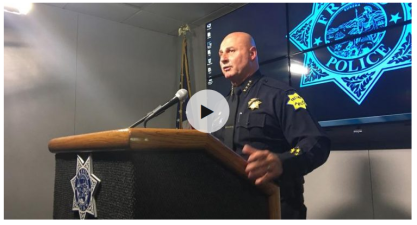 As I reflect on this question, I can’t help but think of Fresno’s (CA) police chief Jerry Dyer’s response to the question “What is injustice?”, during a community gathering intended to create spaces for conversations around community policing, BLM (Black Lives Matter), and coming together. After using a story of a local tragedy to define injustice–a story of a child who became innocent casualty to street crime and no one in the community seemed to want to collaborate with the police–Chief Dyer made an interesting statement about the seemingly racialized nature of policing in Fresno. In the video interview, Chief Dyer says:

The truth of the matter is the reason we are in these neighborhoods in policing is because we know that’s where the violence occurs. We unfortunately know that 53% of the shootings that occur in Fresno are committed by African Americans, even though they only make up 7.7% of the population … So it stands as a reason that our officers are gonna be in those neighborhoods for the protection of people. And during that time, they’re gonna be making traffic stops, detaining people … and there’s a potential for confrontation.

In sum, what Chief Dyer is saying–if I am to take his words at point blank–is that the police practice of stopping and frisking, detaining, and interrogating people–viz. African Americans–in high crime neighborhoods should be met with understanding from the public, especially in light of what the criminal data reveals.

I agree: a community not holding a killer of a child accountable is definitely unjust! And I agree that some of these neighborhoods have high degrees of criminal activity, according to records. But really, Chief? Should the crime of a few really alter the way the rest of the community gets treated?

With much respect to law enforcement (I know many whose hearts are sincere), I must push back. This is not a police state! People should not have to bear with police discrimination just because they live in high crime neighborhoods. As reasonable as the Chief’s explanation may seem to many officers and Fresnans (and other officers and people across the nation), this practice and its way of thinking is not right. In fact, I think it is just as reasonable to suspect that behind the rhetoric and methodology at work in this form of profiling lurks the same racial stereotypes and prejudices that existed in the formerly institutionalized practice of racial profiling. In other words, the two, racial profiling and what I call “social-spatial profiling” (a term I use to avoid sophisticatingly complex, criminological jargon), are essentially the same thing: both approaches end up targeting the same people (viz. Blacks and Latinos) and discriminate against them, treating them as possible suspects of crime! The only difference between the two is that the starting point of one is explicitly race/ethnicity while the starting point of the other is geography associated with criminal statistics. And since the former police practice of racial profiling is no longer appropriate, it is reasonable to suspect that this less controversial yet more subtle approach has replaced it. The only uniqueness of this new form of criminal profiling is that it helps construct an image of criminality that avoids blatantly racialized categories and focuses instead on city space, namely city spaces where crime statistics are high (i.e. “hot spots”). This geographic, hot spot centered, profiling approach focuses on the repetition of crime within a particular area, helping investigators predict “the [offender’s] most likely place of residence, place of work, social venues and travel routes, etc.”[1] This approach, however, tends to go beyond identifying repetitions of crime within geographic space and ultimately defines neighborhoods ontologically, creating a one-sided portrait of a community, which then affects law enforcement and the public’s perception not only of the space but of the people that live in that space. As I said in a previous blog post:

By profiling criminality in this way, our police institutions ultimately move beyond managing assessing criminal data and into generalizing a whole community of people. The statistics represent the criminality of a few, but the image created includes the characteristics of the many. As a result, both the criminals and the broader community to which the criminals belong become indistinguishable. In mathematical terms, the numerator (criminals) is equated with the denominator (their ethnic community), and the fraction (differences) consequently transforms into a whole number (sameness).

This way of identifying criminality is incomplete, unfair, and imbalanced. Ultimately, it is discriminatory and racist. It compels people to conceptualize criminality with images of poor urban neighborhoods, areas filled with violent and kleptomaniacal people of color. Moreover, this form of profiling overlooks the fact that crime is likewise being committed by people who live in economically stable neighborhoods, though these crimes may seem different in form. These kinds of crimes, what I call “crimes of the affluent”—tax fraud, prescription drug abuse, DUI (Driving Under the Influence), internet hacking, identity theft, embezzlement, negligence in employee safety—are not always considered the kinds of crimes that we should worry about, even though the impact of these crimes are just as damaging as the kind of crimes that prevail in urban neighborhoods.[2] Unfortunately, crime is not generally associated with affluent–and especially White–people, nor are criminal investigators saying, “The reason we are continually interrogating people who live in affluent neighborhoods is because we know statistically that they are the ones engaged in large scale white collar crimes.” The fact of the matter is officers don’t monitor affluent neighborhoods or interrogate the people who live therein because crime is not generally associated with those geographic spaces nor with the dominant race/ethnicity (White) that tend to reside in those spaces, and certainly not with the kind of crime that people in those spaces are known to commit. Instead, crime is associated with the kinds of crimes that are committed in economically disenfranchised neighborhoods. As a result, affluent people are generally treated as innocent until proven guilty, while poor people of color are treated as guilty until proven innocent–even though both kinds of people are equally engaged in criminal behavior.

Let’s be honest: associating crime with poor neighborhoods of color seems like a much more innocent way of identifying criminality than associating crime with race and ethnicity. But it is essentially a form of “stealth racism” in policing. By this, I do not mean that officers are themselves racist, though some officers sometimes are. The point I am making here is that the institutional systems of protocol that officers have to abide by, continue to operate in the same ways that they once did under the paradigm of racialized policing approaches. Whereas racism was once overt in the old paradigm, it is now covert in the new, stealth and hidden beneath the language of geographically based crime control efforts. People, and especially law enforcement officers, do not generally like to be seen as prejudiced or racist. But this new way of determining crime control, by associating crime with areas of urban poverty rather than explicitly with race, makes discriminatory policing practices seem understandable.[3]

These articulations used to justify this practice are none other than part of a tortuous language game: they mostly serve to hide the practice of racial profiling. But even worse, this practice of associating criminality with a particular neighborhood affects one’s perception of the people who reside in that area. Associating criminality with dwelling space directly associates crime with its people indirectly; applying labels geographically, labels people ontologically. In the words of Willie Jennings: “This [type of] linguistic deployment alters reality, blowing by and through the specifics of identity bound to land, space, and place and narrating a new world that binds bodies to unrelenting aesthetic judgments.”[4] And the judgments that come from this form of labeling inflicts serious injury to the people who reside therein.

As a Christian who is called to be a peacemaker and to live in solidarity with society’s disenfranchised, I must uncover the truth hidden behind these kinds of de-humanzing practices. I must say, “No, Chief. This way of identifying crime doesn’t justify the way officers engage our neighbors. While seeking to define injustice in an act of unjustifiable street brutality, your way of justifying discriminatory police engagement in disenfranchised communities of color is itself unjust! There is a reason why people won’t collaborate with officers on investigations, and the explanation for this is found in the distrust that these police practices tend to engender in poor communities of color.”

Don’t be fooled by the rhetoric or by the way that criminal statistics/data are being used. Behind the practice of this type of socio-spatial profiling lies the notorious practice of racial profiling, a practice that puts people in danger of institutional violence. In fact, this form of labeling impacts people of color to such an extent that even if one of them was encountered by an armed citizen outside of their neighborhood, that person of color would be stereotyped and possibly treated as dangerous or criminal. Remember Trayvon Martin: the Black teenager who was shot and killed by the neighborhood watch leader, George Zimmerman. The reason? Trayvon looked like he was “from the other side of town”, up to no good–a criminal.[5]

[2] Jefferey Reiman, The Rich Get Richer and the Poor Get Prison, Kindle ed., chap. 2.